Home Dog Stories Is this dog just sleep walking or is something more going on? 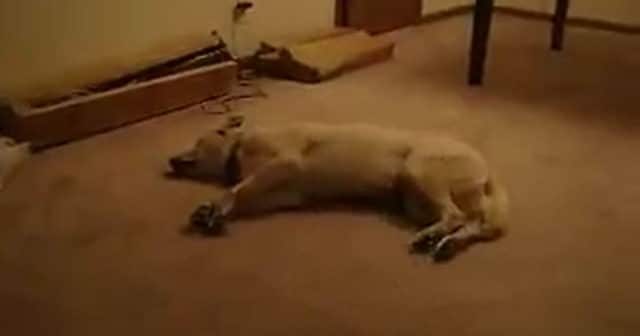 I think Bizkit (the dog in the video below) must be having a really amazing dream. At first, he seems pretty peaceful… But then he springs to life…

I imagine he is probably dreaming about hunting in the forest or something like that.  At first, he picks up the scent of a squirrel or mouse; and, then, closes in on his prey at a full run!  Unfortunately, when he springs on his prey, he ends up with a very different surprise.

But, in all seriousness, is there something more going on than just sleep walking?  According to Pet Place, dogs have sleeping patterns similar to humans (REM rapid eye movement sleep and SWS or slow wave sleep).  So, Bizkit is probably just having a fun run in the forest!  But, could something more sinister be going on?  Could Bizkit be having a neurological issue or maybe even a mild seizure?

There just seems like there is so much is activity going on for Bizkit to be just sleeping.  If Bizkit were my dog, I’d be watching him closely.  And, I’d probably get him checked out if this was happening all the time.  But, judge for yourself, watch the video below.