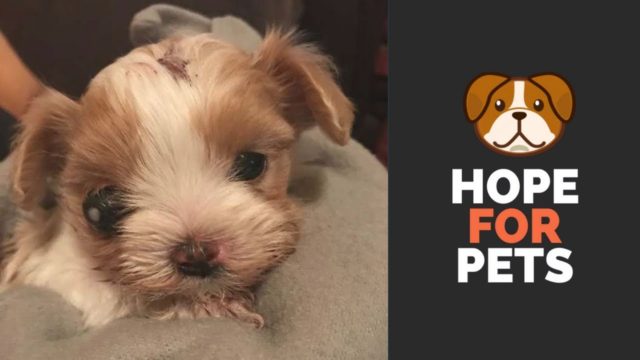 This is the saddest story ever but also filled with love and hope. Eddie was taking a break at his job. He works at Albertson’s grocery store in California. On his break he spotted a shoebox sitting on the ground next to the dumpster. He could’ve just picked it up and thrown it away but he didn’t. Something inspired Eddie… told him to lift the lid to see what was inside maybe it was the voice of God? When he lifted the lid he found the fuzziest cutest and biggest surprise, also the tiniest puppy he’d ever seen with his eyes. It was a wonder even how the puppy stayed alive in that little shoebox as it was a very hot day in California and the puppy had no water no food no light inside that dark little box. Surely he was bound to die if Eddie had not found him. This tiny tiny puppy also had blood on the top of his head from an injury and his eyes were bulging. Eddie immediately got in touch with the founder of hand in Paso in California a rescue group and inquired about how to help and save the life of this little tiny dog. The little pup was so weak and he was very anemic and starting to go into seizures, help was on the way. It was believed that the tiny little furry friend was a Shih Tzu mix but too young to be on his own he should’ve still been nursing with his mother. Eddie wasn’t able to get the pup over to the rescue center that night so he had to care for him overnight on his own. So he made a plan with the rescue crew to meet at the professional vet clinic first thing in the morning to analyze the situation. The vet recommended surgery for the puppies injured eye because it was about to rupture and then he would lose his sight. Eddie was very worried about putting the puppy into surgery because he didn’t know if he was strong enough to make it. He named the puppy Albert and found out that morning that he only weighed approxima

tely 1 pound. His full name was Albert Einstein maybe that would pull him through the surgery. After the surgery Eddie Olivarez Took Albert home and kept him with him for a few days feeding him through a syringe. It was imperative that he stayed hydrated and could start to get some nutrition. Then on the next Monday The rescue crew Woods friend Bernie took over Alberts foster care. He said he would keep him until Albert was strong enough to go home forever. The story is intended to be shared with friends and family to bring hope for pets and help keep animals safe for together we can make a difference.